Water quality is a critical factor for trouble-free and safe operation of a steam boiler system.

It must be monitored in the following areas:

This is why both continuous in-process checks and periodic inspections of the water quality at various points in the system are carried out:

Info on Equipment and control

When recirculating condensate, there is a danger of condensate which has become contaminated as a result of product ingress in the heat exchanger entering the steam boiler. This can cause considerable damage which can be prevented by monitoring the water quality. In doing so a distinction is made between substances:

Invasion of foreign matter in the condensate system that increases the conductivity can be quickly and reliably detected and signalled by a conductivity monitoring system (e.g. alkalis, acids, freshwater, water from boiling baths). Necessary measures are automatically introduced. These systems operate with automatic temperature compensation to ensure that temperature fluctuations do not lead to fault messages.

They are used in steam boiler systems, e.g. to monitor condensate or feed water.

If the conductivity in the condensate of roughly 50 µS/cm is exceeded, the condensate should be immediately discarded (e.g. via a three way valve). This excludes the possibility of contamination of the feed water, and subsequently also the steam boiler, before it enters the feed water vessel. The boiler operation itself therefore does not have to be interrupted and troubleshooting in the condensate system or heat exchangers can be carried out without any time pressure. However, it should be observed that the conductivity sensor detects all condensate flows.

The softened water is monitored by a residual hardness monitoring device. Poor regeneration or overrunning of the water softener could lead to hardness invasion in the downstream system components. To prevent this the residual hardness is monitored either continuously or intermittently. If the limit of 0.01mmol/l is exceeded for a certain period, a fault display automatically appears in order to protect the downstream system components.

If there is also a danger of oil, grease or other emulsions finding their way into the condensate system, a turbidity monitoring system must be installed in addition to a conductivity monitoring system. The particle content of foreign matter is continuously monitored using optical measuring methods. Whenever possible, this should be installed upstream of the condensate tank as fresh steam or re-evaporation can affect the measurement.

If the set value is exceeded, it also makes sense to discard the condensate in this case until the turbidity falls below the set value once again.

Functions of the water analyser are: 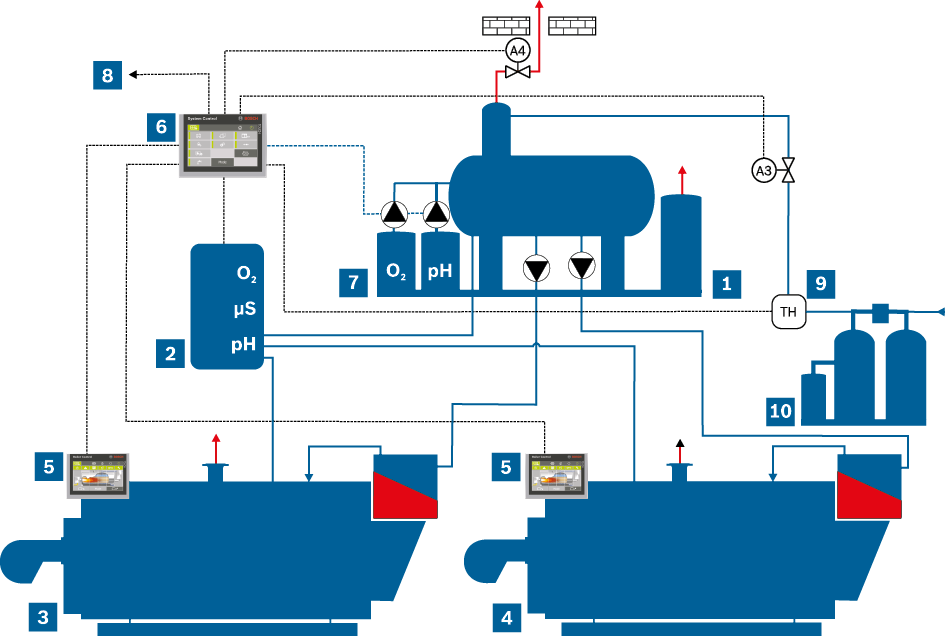