Increasing efficiency at the boiler and system

The losses due to conductivity and radiation occur due to the temperature differential between the medium in steam boilers, lines and valves and the surroundings.

The extent of the heat losses essentially depends on the surface area, the medium, the ambient temperature and design of the insulation.

As these losses are not output-dependent, they occur continuously, also in downtime phases, and are therefore also present 365 days a year in systems or parts of systems that have not been taken out of service. They adversely affect the annual degree of utilisation of the boiler system, especially if the system is frequently operated in partial load.

Info on Annual degree of utilisation

In addition to a more time-consuming investigation using a thermal imaging camera, “hotspots”, or areas where the greatest heat losses occur, can be detected and eliminated by feeling out the hot areas, visual inspection of the insulation or by using a surface or radiation thermometer.

The reason for this lies in the radiation coefficient of the insulating surface. If the coefficient is higher, the heat losses increase but at the same time the surface temperature decreases. It is therefore advantageous to use a material with a low emission coefficient ε.

List of emission coefficients, heat losses and surface temperatures of different surfaces
1) According to VDI 2055 Sheet 1 Appendix A8

The biggest heat losses in existing systems normally occur as a result of uninsulated valves, areas that have not been re-insulated following inspection or repair or thermal bridges formed when moving the protective insulation layer.

Most of the conduction and radiation heat losses in existing systems can be avoided by eliminating these “hotspots” without having to completely re-insulate the system. Insulation of uninsulated areas in the overall system (e.g. boiler, steam and condensate pipes, valves, tanks) is one of the most efficient saving measures in existing systems.

The heat loss at the boiler itself can also be easily determined in the idle state. The pressure drop can be determined once the boiler has been shut down (e.g. at the weekend) with the steam, surface blowdown and bottom blowdown valves closed. Starting with a steam pressure in the boiler of 10 bar, the pressure drop should be no more than 0.2 bar/h. It must be observed that not only the radiation and conduction losses must be considered, but also the ventilation losses due to the flue resistance (if applicable). The result may also be influenced by valves that do not close tightly.

However, the heat loss measured indirectly via the pressure drop is present independent of the cause, and should be avoided.

The efficiency of the insulation can be improved by observing the following points.

The surface temperature and heat loss can be reduced by increasing the insulation thickness. In this case however the aim is to choose an optimisation measure that is sensible and economical as the surface losses cannot by any means be halved simply by doubling the thickness of the insulation.

In addition to the insulation thickness, the size of the surface also plays a decisive role. Compact boiler types, e.g. with asymmetrical design, as well as an integrated economiser and resulting smaller insulation surface are advantageous in this respect.

The figure above shows that with an insulation thickness of 100mm and a medium temperature of 150°C the heat loss is roughly 57W/m².

This applies only for insulated areas without thermal bridges in each case. As the losses via these bridges can quickly exceed the losses in the well insulated cylindrical area, they must always be considered and, whenever possible, minimised.

To save energy and to comply with occupational health and safety requirements, it is now mandatory for pipework carrying hot media in all parts of the system to be continuously insulated. The regulations and additionally the economic aspects indicate what specific insulation thickness to use.

Both the absolute heat loss per running meter of uninsulated pipework (left ordinate) and also the savings factor of an insulated section of pipework (right ordinate) can be determined with reference to the medium temperature, the pipework diameter and insulation thickness from the following diagram. 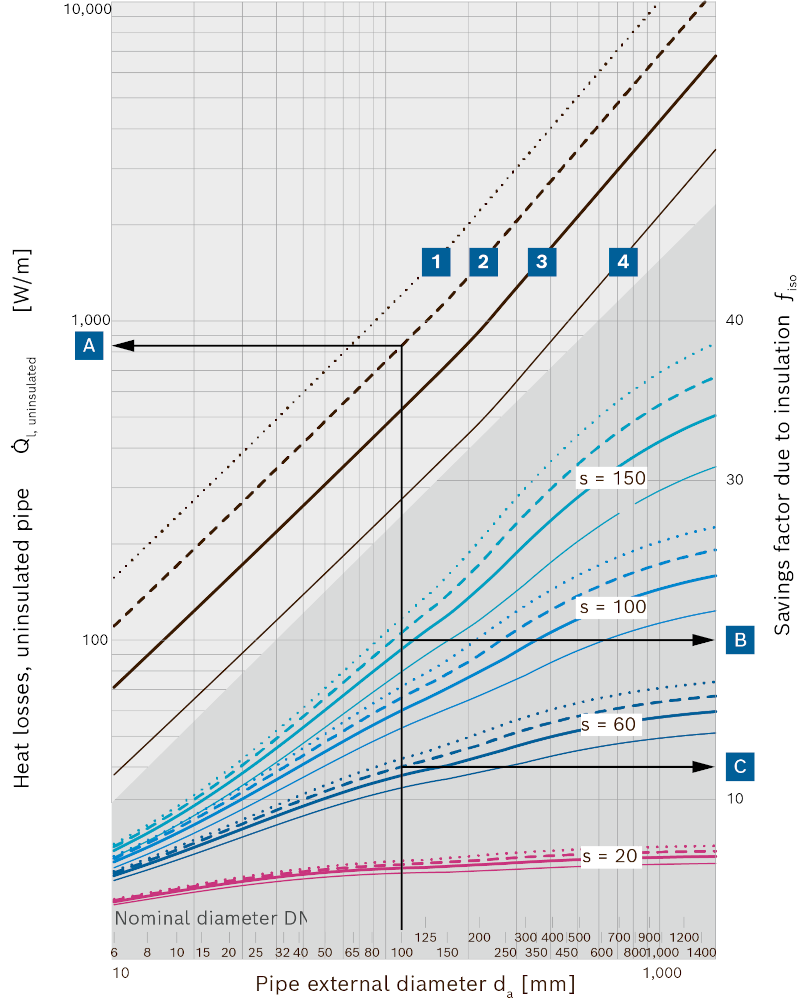 Savings factor due to insulation and heat losses in pipework

In this case every metre of uninsulated pipework costs more than €300 a year.

Example of potential savings as a result of increasing the insulation thickness, based on a steam pipe

2) With reference to the thickness of the insulation s = 60mm

Thermal bridges invariably occur when metallic connections with a very high thermal conductivity break through the insulation. This is the case, for example, with connectors, boiler supports or platform brackets.

Similarly, spacers should not be used with cylindrical casings as these also act as thermal bridges. Heat conduction from the hot boiler drum to the protective insulation jacket is prevented and the thermal insulation performance of the insulating mat is completely effective. 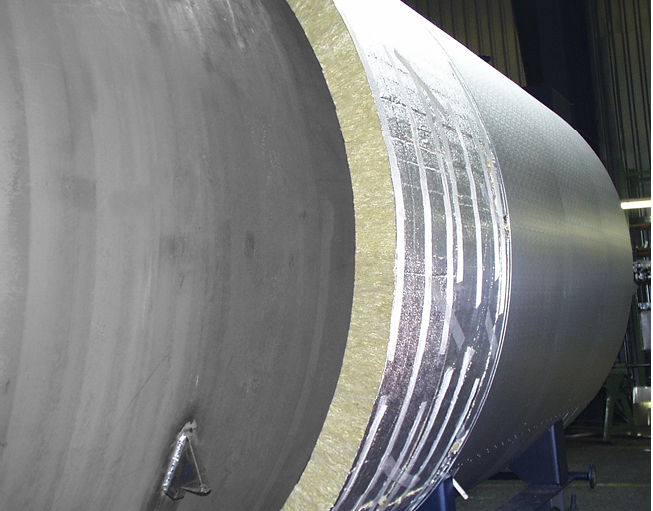 Steam boilers are subject to periodic internal inspections by the relevant monitoring organisations. Openings are required in the insulation jacket for inspection apertures, such as hand holes or head holes, or manholes. These openings are insulated and sealed with removable insulating covers.

It must be ensured, especially following inspections or if the insulating covers have been removed for any other reason, that the insulation is reinstalled on the inspection apertures.

If an inspection aperture with an area of roughly 0.5m² is not resealed, this means that at an operating pressure of 10 bar and a temperature of 185°C the energy loss per day is roughly 15kWh. 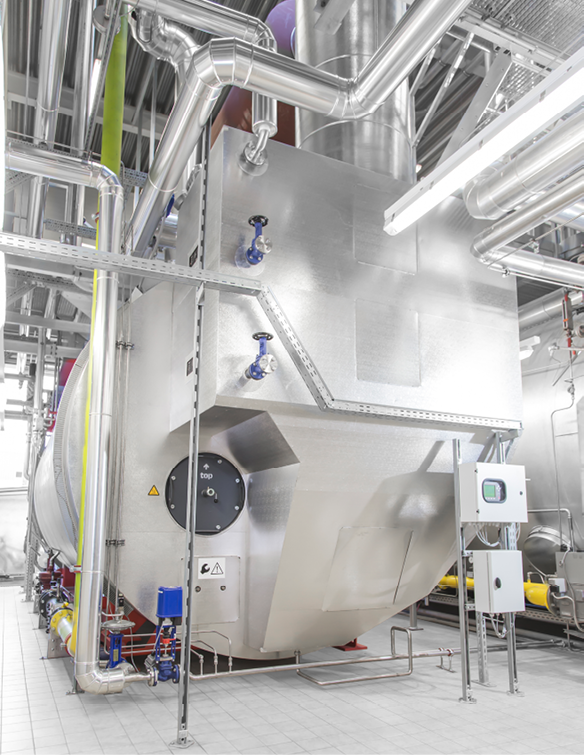 Valves are located at many points in steam boiler systems and are required for operation and maintenance. For installation or cost reasons, or owing to various supply limits, the insulation of valves or adaptor flanges in new systems is still frequently omitted. Likewise, uninsulated valves can also often be found in existing systems.

A great deal of energy is however lost via these uninsulated areas. The following table can be used to estimate the energy lost via an uninsulated valve.

As an entire steam system requires valves at many points, the total potential based on insulation of the valves of the steam and condensate system is on average roughly 1 – 5% of the fuel consumption.