The heat energy Qi,a supplied during a year is determined based on the actual fuel energy used. To do this, the fuel quantity is measured with gas or oil counters and multiplied by the net calorific value. 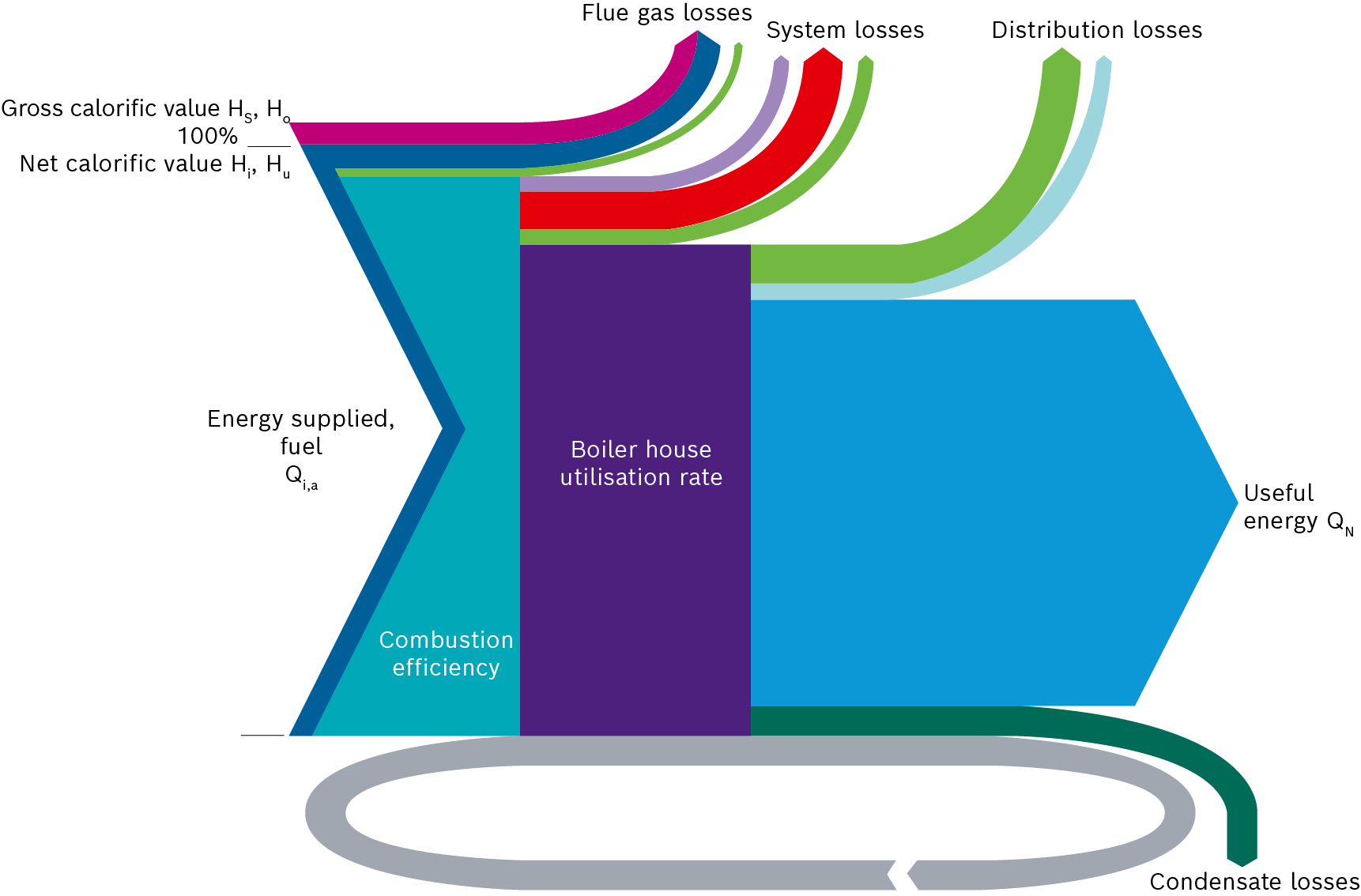 The amount of energy actually used during operation Qo,a is determined using a steam meter and a heat quantity calculator. The quantity of heat in the steam is calculated from the quantity of steam and steam pressure, and possibly the temperature of the steam.

When measured and added up over a year and divided by the amount of energy in the fuel, the annual degree of utilisation of the system is obtained.

A boiler efficiency of 95% may be accompanied by an actual annual degree of utilisation of only 60%. Especially if the average boiler load is very small, the conduction and radiation losses, which generally do not depend on the boiler load, are very high in relation to the fuel heat used. The losses for pre-ventilation of the boiler system during cycling of the burner and for water treatment are added to this.

If the system is frequently only operated in partial load, the losses can occasionally be 20 – 40% of the fuel required for operation of the system.

Formula for calculating the annual degree of utilisation

Boiler efficiency with condensing use

In addition to CO2, the flue gas produced during combustion of the hydrocarbon chains found in most liquid or gaseous fuels also includes H2O, i.e. water. At high flue gas temperatures, this water is present in the form of vapour.

However, if the flue gas temperature can be cooled locally to below the dew point, some of the water vapour in the flue gas condenses on the cold heat transfer surfaces and the heat released during this process can be used.

Formula for calculating the boiler efficiency with condensing use

Efficiencies higher than 100% when using condensing technology are not perpetuum mobile, and can instead be traced back purely to the reference basis of the net calorific value Hi. If the energy used were referenced to the physically correct gross calorific value Hs, 100% would be the maximum efficiency that could be achieved without any losses whatsoever. However, to allow comparisons to be drawn with conventional systems, it has been decided to retain the net calorific value as reference value, also in the case of condensing boilers.

The purpose of the following diagram is to make clear how flue gas condensation increases efficiency and the optimisation in terms of cost-effectiveness.

In the diagram for natural gas H an efficiency of 100.9% is achieved with a condensate accumulation rate of 34% and a measured average flue gas temperature of 75°C, for example.

In addition to the quantity of water, the greatest possible distance between the water inlet temperature and minimum dew point is decisive for the condensate accumulation rate. That is shown in the diagram by the red (natural gas H) or purple (fuel oil EL) efficiency curve, which is temperature-dependent. 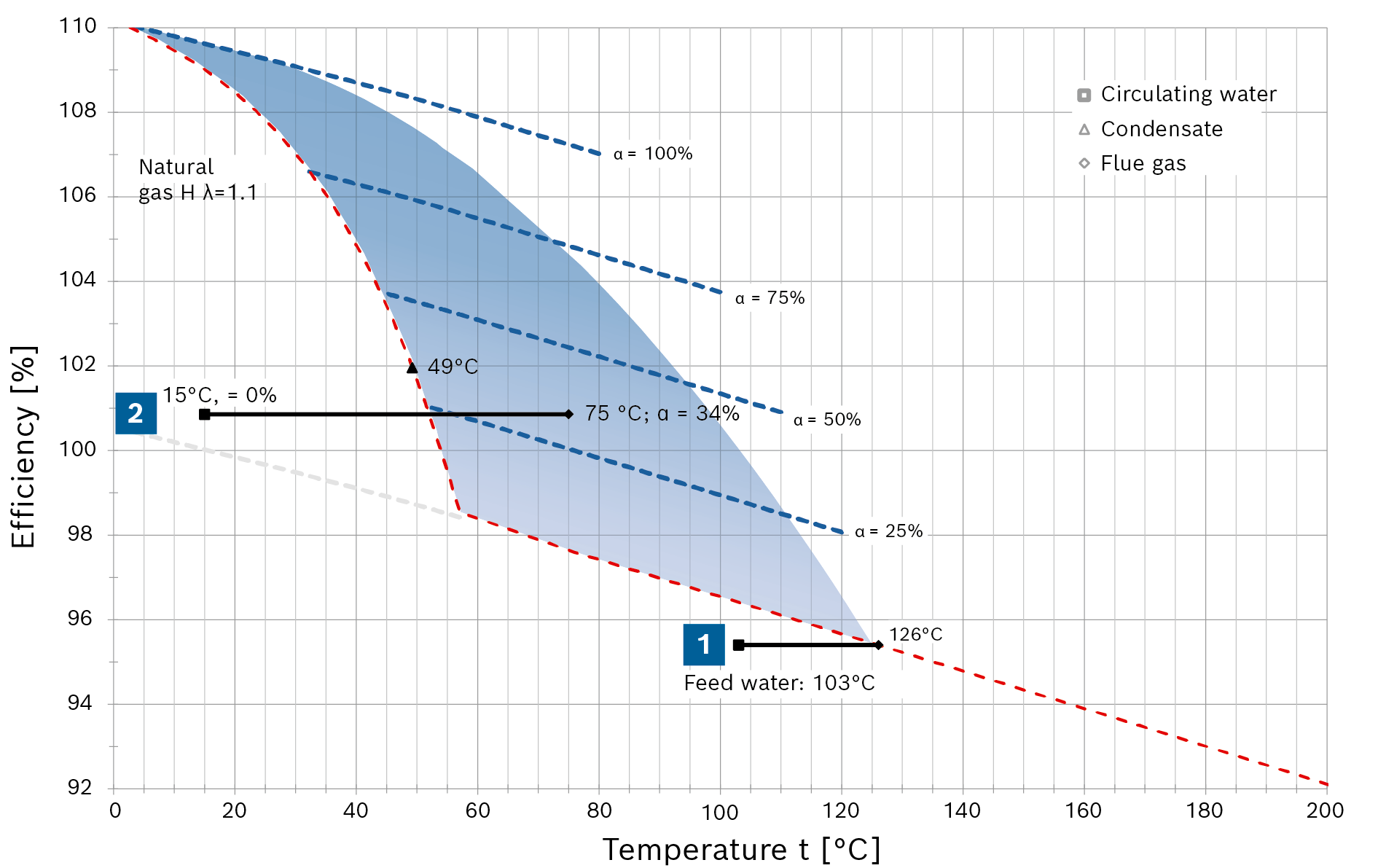 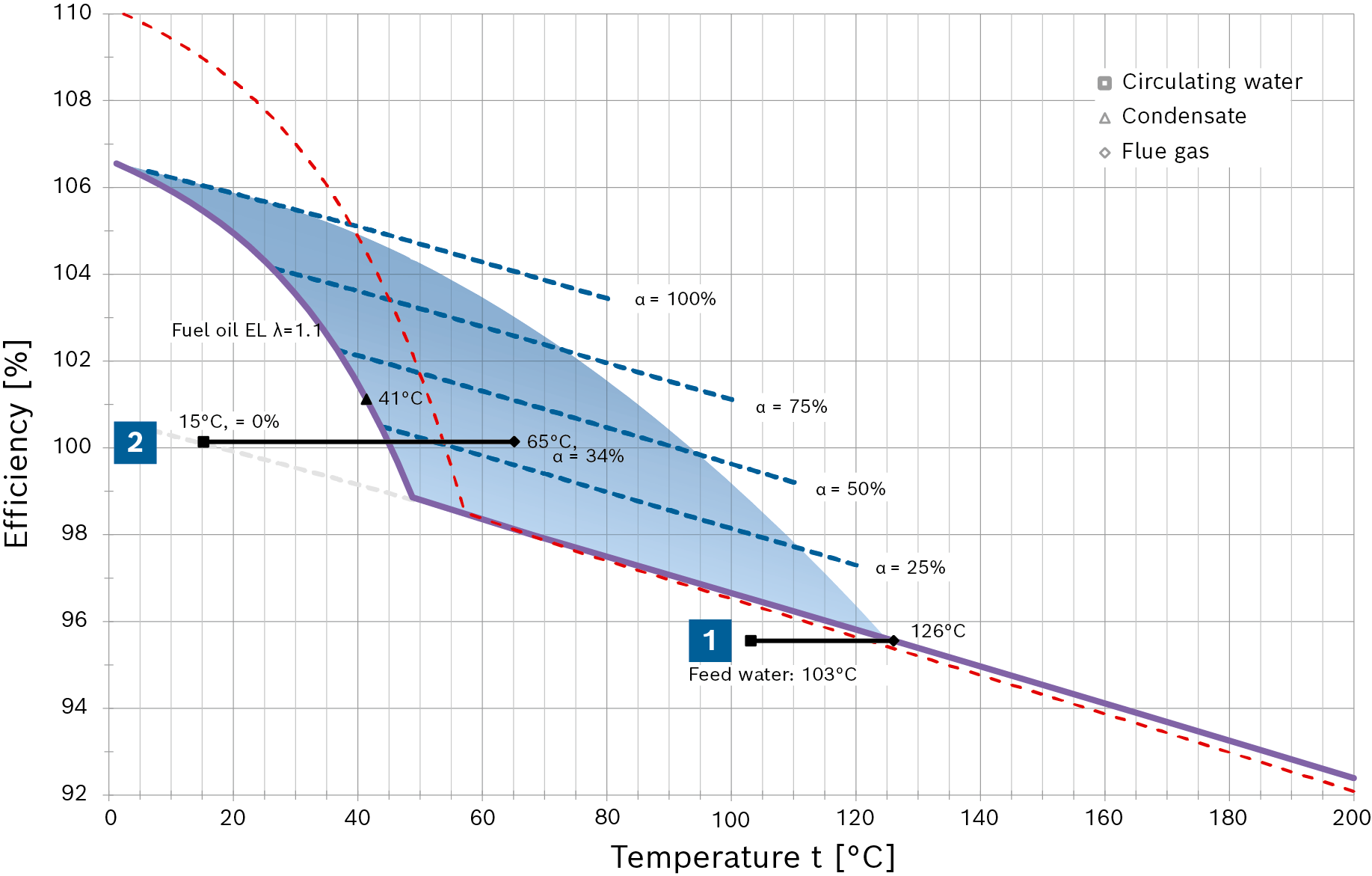 Especially when using oil as fuel, it must be observed that because the fuel composition is different to gas, the water vapour fraction in the flue gas is significantly lower and therefore the efficiency gain due to condensation is also correspondingly less.